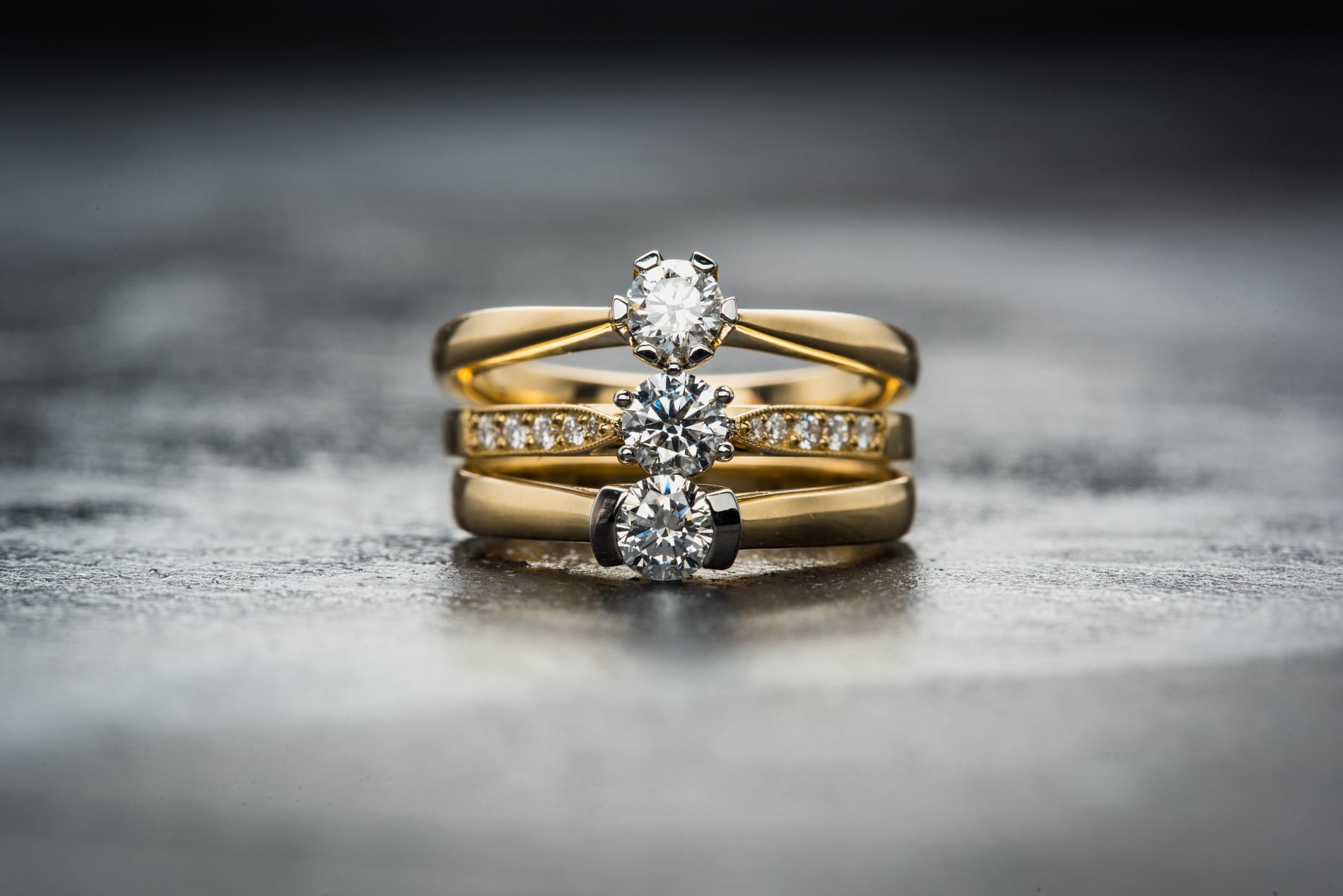 What is a diamond ASET?

The American Gem Society has an ingeniously simple device that provides a wealth of information about how a diamond handles light. It is called the Angular Spectrum Evaluation Tool. As you are probably aware, a diamond derives its beauty for the most part from the way light plays through it. The terms used to refer to the way light expresses itself in a diamond are fire and brilliance. One way to measure this fire and brilliance is by looking at a diamond through this extremely clever tool, the ASET. 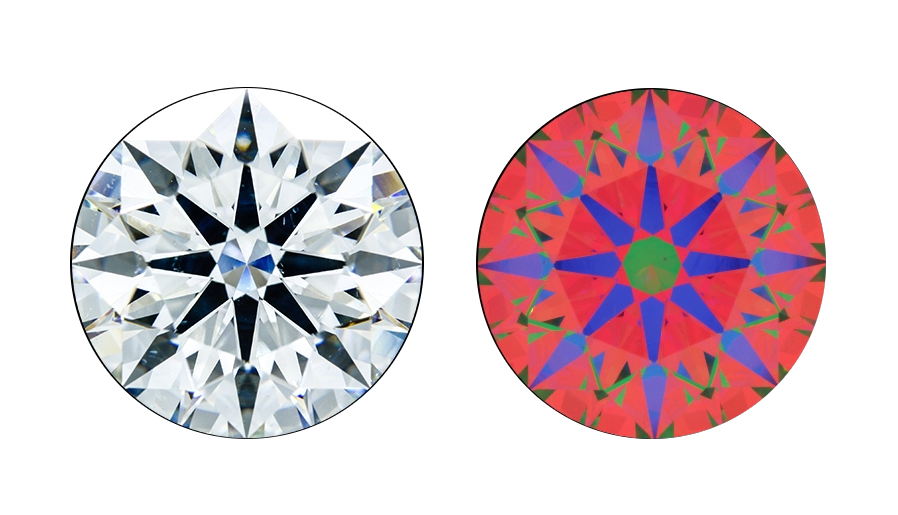 The ASET is a simple reflector tool. But don’t be fooled by it’s simple operation. It’s more than a mere tool. The measurements provided by ASET are the theoretical framework on which the American Gem Society Laboratories (AGSL) bases its light performance and cut grading system. The grading system we are talking about is the most advanced and scientifically vetted cut grading system in the diamond market. The methods AGSL uses to measure light performance makes use of both the ASET reflector device as well as a sophisticated software-based ray tracing analysis. This not only provides light performance grading but can also render computer generated ASET images and other types of light maps.

What an ASET report tells you

How Does ASET Work?

The way ASET works is fairly straightforward and easy to understand. It has to do with how a diamond deals with light. Each surface, or facet, behaves both like a mirror and like a window. A mirror reflects light while a window allows light to pass through it. The way a facet performs depends on where it is situated that is to say on the angle with which light hits it. The way each angle’s efficiency is measured is very clever in its simplicity. It’s done with color coding. The various facets of a diamond reflect certain colors in the device depending on which way they are facing. Different colors in the device are placed at a specific angular range. The light that the viewer sees coming through the diamond when using the ASET tool will appear in different colors depending on where that light is coming from. The ASET therefore shows which facets are returning light and which ones are leaking light.

These are the angular ranges of an ASET:

The analysis of a diamond’s performance is based on the understanding that light typically shines from higher angles, like sunlight or overhead artificial light. The most direct light entering a diamond will generally come from the higher angular ranges. Low angle light is more often than not coming off of objects in the surroundings and therefore is usually less intense than high angle light. Light from the directly overhead is blocked by our head when we are looking at a diamond up close. This is taken into account in creating a diamond’s cut. This shadow plays a role in the contrast which is part of the attractiveness of a diamond. This effect in the ASET is color coded blue. In the right amounts and distribution this obscuration, “diamond-speak” for head shadow, creates a nice contrast. This is an important contribution to the appearance of brilliance and to the on/off blinking of the facets. This is what’s referred to as scintillation.

How to Read an ASET Image

How ASET shows that a round brilliant diamond is well cut. 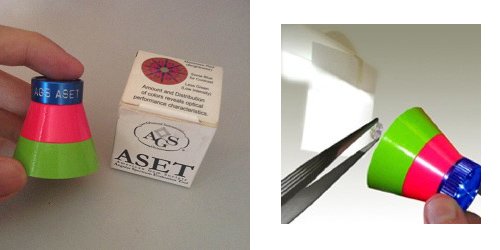 What one is hoping to see when looking at a diamond using an ASET is a majority of red reflected through the diamond, a little bit of green, and a distinctive symmetrical pattern in blue. Light leakage is another aspect that is shown in an ASET. Light leakage is shown in the color of the chosen backdrop, which can be either white or black. 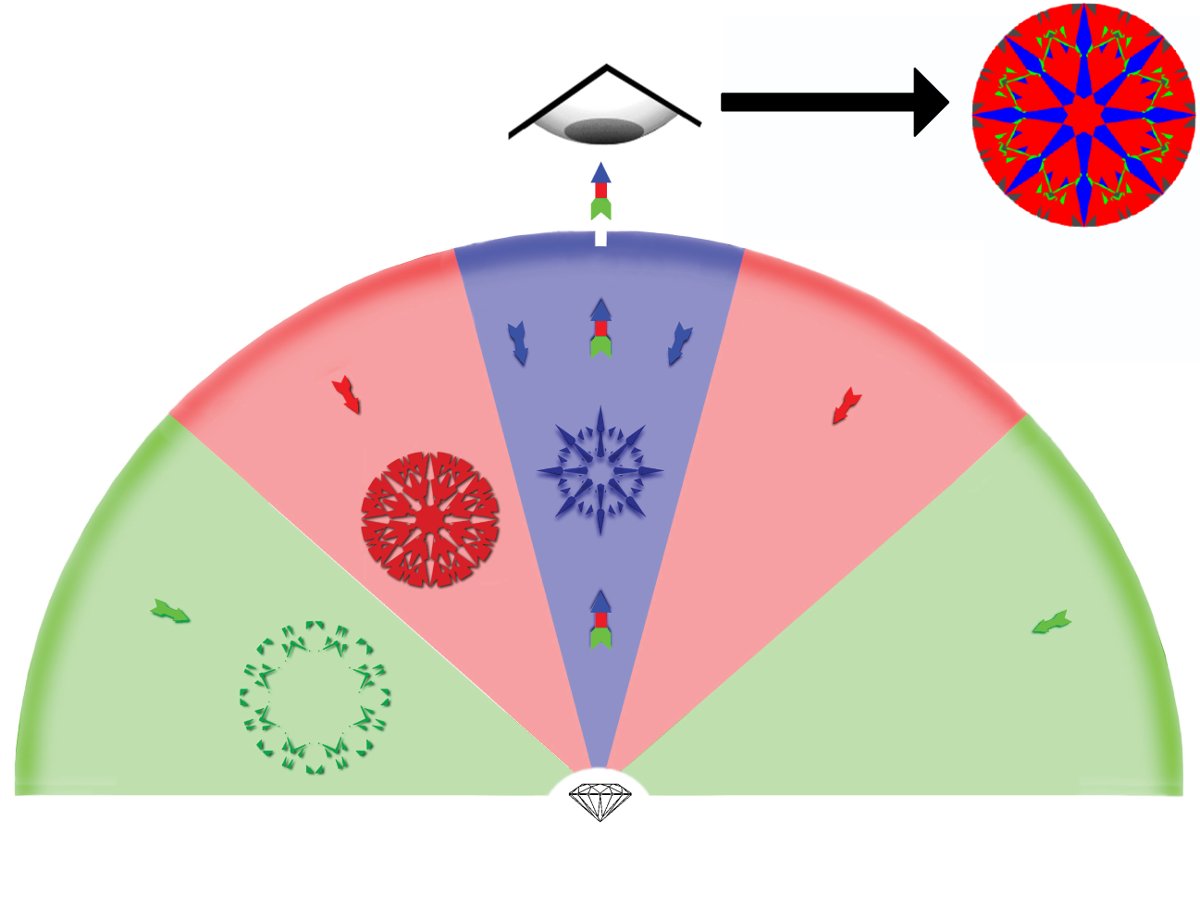 The great thing about ASET is that it works on any diamond cut, whether round brilliant , cushion, princess, radiant or what have you. Each shape has it’s own optimum performance and grading constructs. Measurement values been developed for the most common shapes. The American Gem Society Laboratory has already developed grading systems for Round, Princess, Oval, Emerald Cut, some Cushion, and certain proprietary shapes. Fancy diamond cuts have varied ASET signatures which can be quite different from one stone to the next. Even if you don’t have a lab grading report for a fancy cut diamond an ASET report will show you how it is handling and returning light. 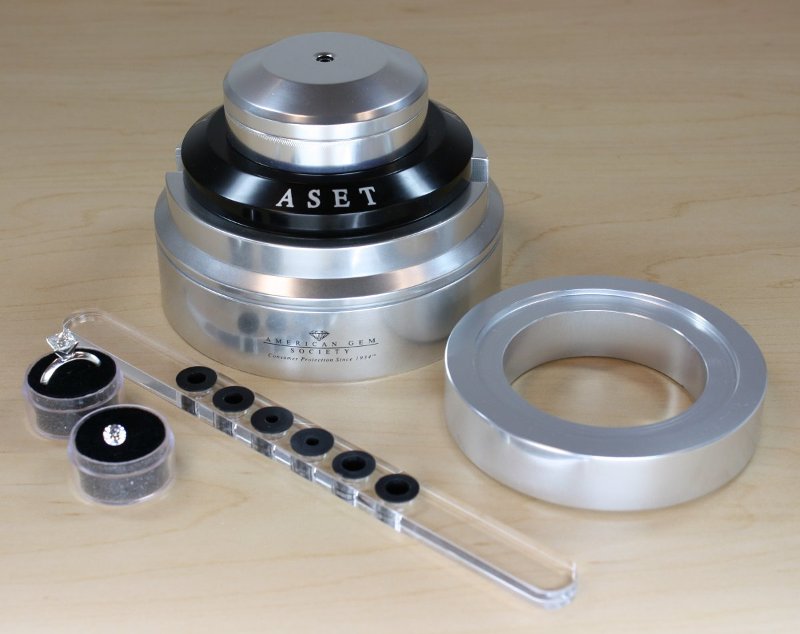 The desktop model in this case has the color coded hemisphere below the diamond. The diamond is placed upside down on the glass to ensure the table of the diamond is perfectly flat. The black cone shaped cover is placed over the diamond creating a black backdrop. The device functions like a periscope with the image being reflected off of mirrors so it can be seen in the viewer.

The handheld model takes a little more getting used to but with practice it is a functional, inexpensive, and highly portable tool for inspecting diamonds. The portable light source is optional, but makes it a little easier to work with. It enables the stone to be placed in a stationary upright position for inspection and provide backlighting. In this case light leakage will appear as white. 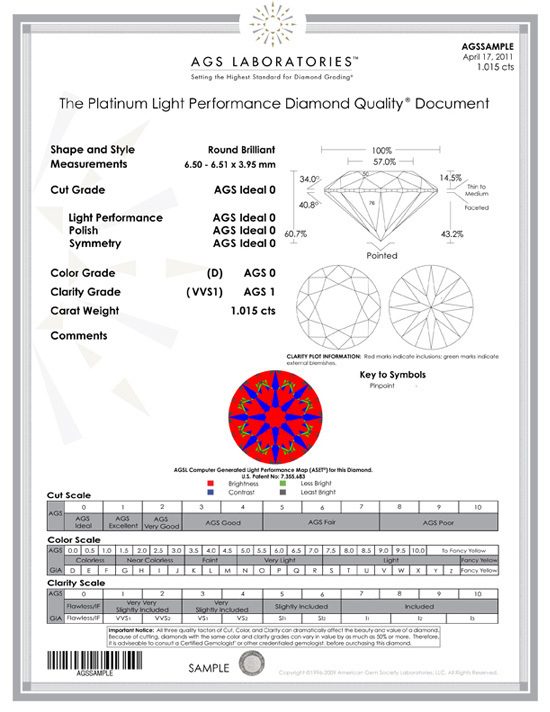 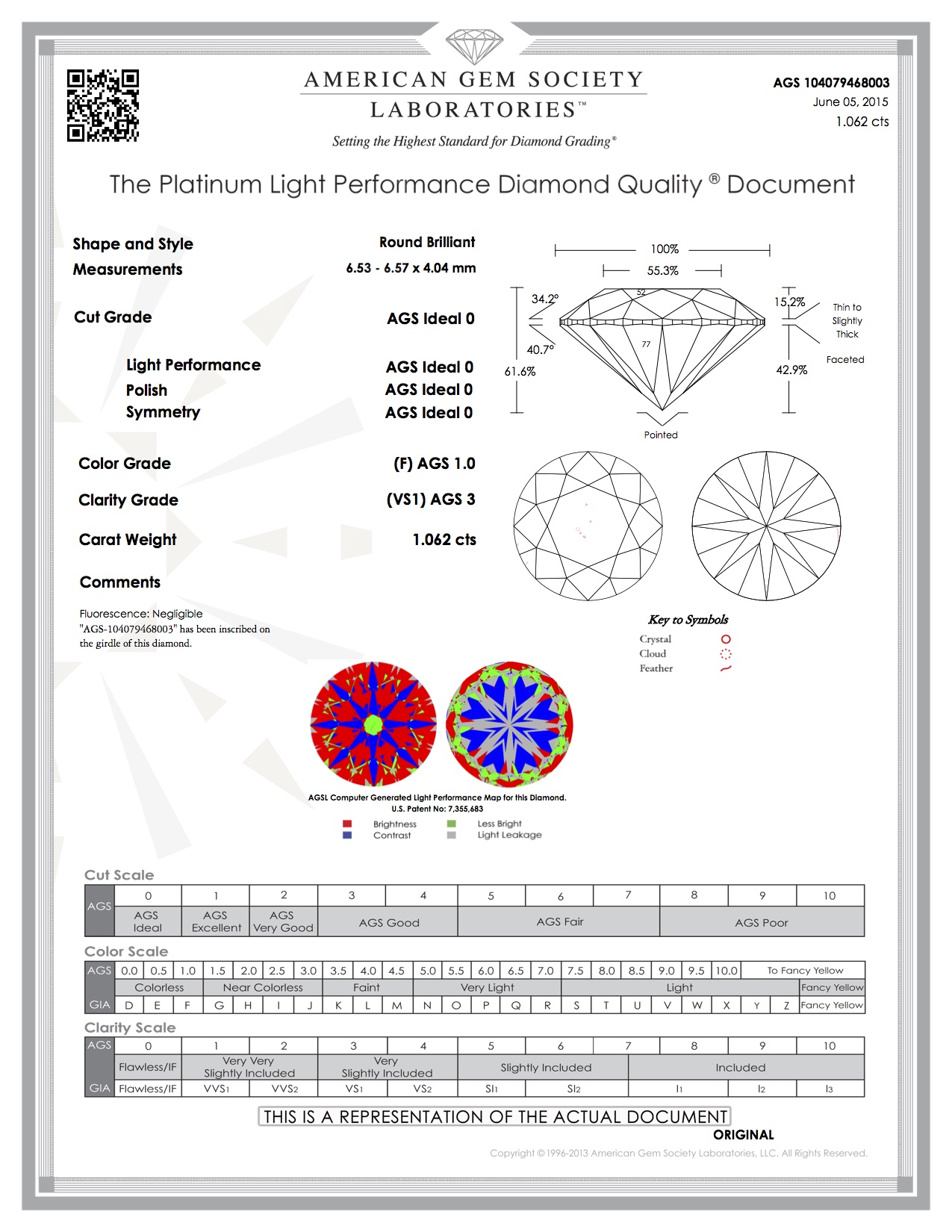 The ASET framework is an important part of the AGS light performance grading system. ASET color coding is used in AGS diamond grading software. Once a 3D scan of a diamond has been entered into the software a mathematical representation of the stone and an ASET analysis are created. The program calculates how each facet of the diamond affects brightness, fire, contrast and leakage. AGSL reports are available that contain ASET light maps. The Platinum report can be ordered with single or with dual light maps showing an ASET view of both the diamond table and pavilion. Dual light maps are mostly provided for high precision diamonds so the hearts and arrows patterning can be appreciated, as well as overall light performance.

Computer generated ASET images are sometimes provided by merchants as they provide useful information about a diamond, even more than a photo can provide. ASET images provided by AGSL, such as the light maps on the reports, are based on the 3D scan. The measuring devices are regularly calibrated and operators know how important the scanning process is. Because the ASET images are generated by mathematical computation within the exact constructs of the theoretical framework, they can be as useful as images of the diamond, and often more accurate. The results of the computer generated models of course rely entirely on the quality of the scan. With computer generated ASETs as well as actual ASET photos, one must consider the source in terms of accuracy.

In the center of a face-up ASET image of a round diamond is a small area around the culet that represents a reflection of the light entering the table.

In the color coded ASET scope sometimes this area appears red, sometimes green, and sometimes a combination of red and green. So which is better, or does it matter?

ASET theory and applications represent a simple yet powerful way to assess diamond light performance. It is both a mathematical construct that forms the basis of sophisticated computerized ray tracing and cut grading of a 3D model of a diamond, as well as a convenient physical tool for use in the field. It can be used with any shape of diamond to gain insight into just how that diamond is handling light.

One question that gets asked frequently is about the center of the ASET map of round diamonds; sometimes it is green and sometimes red. Is it better to have a diamond that shows red or green in the center?

The very center of the light map shows the light gathered from the sides and returned through the table.

Whether red or green in an ASET image makes very little difference to the diamond's performance.

Whether the center is red or green matters very little as both show good light return. The color shown depends on the pavilion main angles. The illustration below shows that the center area of a diamond when placed under an ASET viewer reflects the border area between the red and the green colors in the ASET device.
The ASET is a tool designed to reveal more information about the nature of light return than reflectors like the Ideal Scope. In the ASET hemisphere, the demarcation line between red and green zones is set at 45 degrees. Light entering the diamond above 45º is colored red by the device, below 45º is colored green. It is the pavilion angle that determines which of those colors you will see in the table reflection in the center of the ASET in face-up view. At pavilion angles right about 40.76º the reflection draws light from the point where red meets green. So pavilion angles of 40.75º will be drawing light from less than 45º and thus be colored green. Pavilion angles of 40.77º will be drawing light from just over 45 degrees and be painted red. Both 40.7º and 40.8º are well within the ‘sweet spot’ of AGS 0 parameters. And there is potentially less than 1/100 of a degree of difference that will toggle this area from red to green. The graphic below illustrates how the pavilion angle on either side of the toggle point determines the color of the ASET table reflection of a round ideal diamond.

The difference in color is only due to the fact that the area it is gathering light from is on the border between the two ranges of angles within the ASET. As you can see it makes little to no difference.